AltSoftLab Team is pleased to present our AltGUI Framework based (and included in AltGUI SDK) on the AltSketch Vector Graphics Library with integrations into new Unity UI & NGUI as independent powerful controls. So now you can forget about font atlases, vertex and texture buffers and too much complicated mathematics! Just Draw your controls with pens & brushes! Make control updates (redrawing) only when it's realy needs (not every frame)! Use a wide variety of powerful libraries (HTML, SVG, Chart/Plot, advanced Text Editors, interactive GIS with trackings, Geometry Transformations, etc.) that already exists in AltGUI SDK & create/port the new ones. And the one of the main features of AltGUI is: you can create AltGUI Control once and use it without any modifications and adaptations in new Unity UI & NGUI! All AltGUI functionality can be used in new Unity UI & NGUI without any modifications. Also you can create and test AltGUI controls without Unity Editor as separate application (because AltGUI Core is not depends on any integration and backend UI) and then use it in Unity. And of course you can use AltNETType (our port to .NET of FreeType font engine - you can no more to care about native FreeType libraries on different platforms) dirrectly on the fly creating all characters of TrueType fonts of any language and any glyph variety; native formats image load/save and transform operations; ZIP-ed virtual file storage; and many more other features. Please look down into more details.

Some screenshots are represented below. Look more in AltSoftLab Screenshots Gallery

AltGUI & AltSketch are pure C# CLS compliant 100% managed .NET 2.0 Subset (PCL .NET 4.0 version of assemblies are available only in AltGUI Full SDK), without unsafe blocks GUI Framework and Vector Graphics Library with Software and Hardware Render Backends for Games, Scientific Applications & other uses of Computer Graphics. All core functionality collected in two lightweight libraries AltSketch.dll and AltGUI.dll. It depends only on System assembly and has own Alt.Data & Alt.Xml multiplatform realizations.

AltSketch has System.Drawing (GDI+) like program interface and Software & Hardware Render Backends (solid and texure AA visual data triangulation), contains a subsystem AltNETType - port of wonderful font rendering library Freetype (not need any predefined font atlases with limited chars amount/size/style) and subsystem AltNETImage for Image manipulations (loading, saving, transformations). With AltSketch you can load any fonts or images in a popular graphic formats on the fly just from files, streams, buffers, etc. Using AltSketch you can draw Graphics with Brushes and Pens like you do it with any drawing library. As AltSketch has several integrations with most popular GUI systems and Mobile platforms, you can develop and test a drawing part of your 3D application/game as independent program, and then easy integrate it into your main solution. It is flexible and useful development method in case of main project bulking and test complexity, or useful for team development process.

AltGUI has a Virtual File System support with Zip containers for resources loading. All AltGUI functionality & extensions works via VirtualFS and all resources can be loaded as from real file system, so from Zip containers (from files or memory streams).

Because AltGUI has Windows.Forms like API and functionality (in conjunction with AltSketch that is similar to System.Drawing GDI+) it's easy to understand it and port to AltGUI a wide variety of useful libraries and solutions.

Okay, do you want to know how it's possible to create AltGUI controls usable for Unity UI and NGUI and so on? Let's go.

AltSketch Paint is the base drawing visual control. It makes all for the drawing process and can be used dirrectly as separated UI Element. There are 2 major parameters for it:

• Max FPS - defines maximum refresh calls per second. For invalidating AltSketch Paint you must to call its function Invalidate(). Without this call AltSketch Paint will redraw only on start or when it resized. But if you call Invalidate() on every Update, it will redraw self no more then MaxFPS times per second. So you can call Invalidate so often, as you want - it invalidates not often than MaxFPS times per second. It's useful for the most UI controls, because it's state changes not so often, but can contain many drawing operations. By default we set this parapeter to 60 fps (just the middle of 30 and 120). You can change it to any other value per control.

• Render Type - Software or Hardware. As you could understand we use buffered graphics for controls. You can draw any compound graphics with just 1 draw call per frame. All control render makes to a Texture. In Unity AltSketch can render in 2 ways: Software rendering to Texture2D using AltSketch powerful and fast internal Software render, or Hardware rendering to RenderTexture. Software Render in many cases faster than HW (because it’s no reason of triangulation and other addition procedures). Also no HW Draw Calls used. So SW render used by default for controls. You can change it in the Object Inspector per control. Also you can change it on the fly.

You can attach script to AltSketch Paint control and connect to onPaint event to process painting process. In Update func of script you can call Invalidate() func of AltPaint when you need to redraw your AltSketch Paint element. In the AltGUI SDK look at AltSketch Paint example - it's very simple.

Another way is to create Unity UI or NGUI control is to derive it from AltGUI Control Host and initialize 'Child' property in Start() function of it. Also you can add some cross-calls and Unity Editor properties to it to make this UI control more professional and useful. AltGUI SDK contains several such controls ready to use dirrectly in Unity UI & NGUI (menu structure equals for the Unity UI & NGUI): 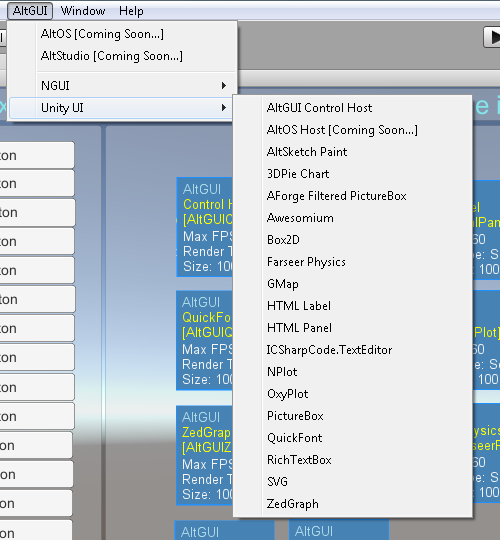 So we already know all about host controls for the both UI systems. The last thing we must to do is just to create a new AltGUI control. It's very easy:

In addition to overrides of event hadlers AltGUI cotrols contain events in the same notation:

Almost all properties/events/functions of each AltGUI control is <summary> documented and can be viewed by intellisense or Assembly View. All functionality and API is like Windows.Forms controls, so it's easy to understand it's work.

Let's try AltGUI and enjoy it!

Also the most amazing AltGUI tool is AltStudio! It's the first developing tool based on absolutely Virtual GUI. AltStudio will be integrated into Unity Editor and will have a powerful Designer Tools for AltGUI and source code editor. And it's coming soon too with new AltGUI examples and applications!

And of course AltOS and AltStudio tools will be the part of AltGUI SDK.

AltSketch demonstration video (all features are available in AltGUI Controls and represented in Demo):


Some screenshots are represented below. Look more in AltSoftLab Screenshots Gallery 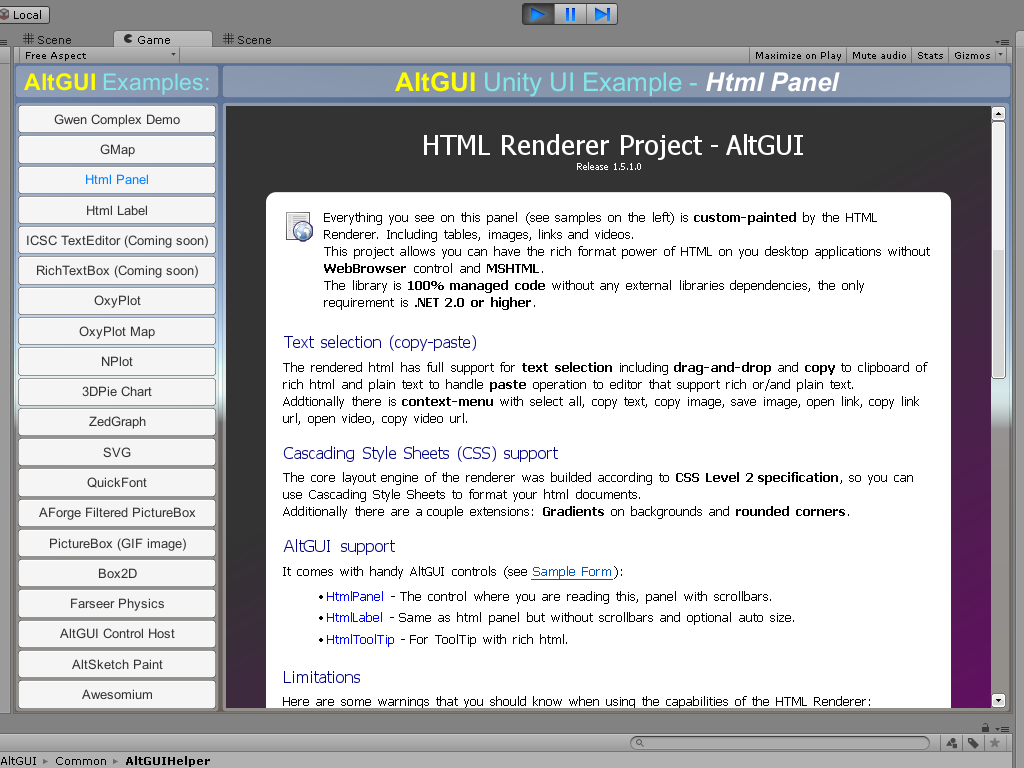 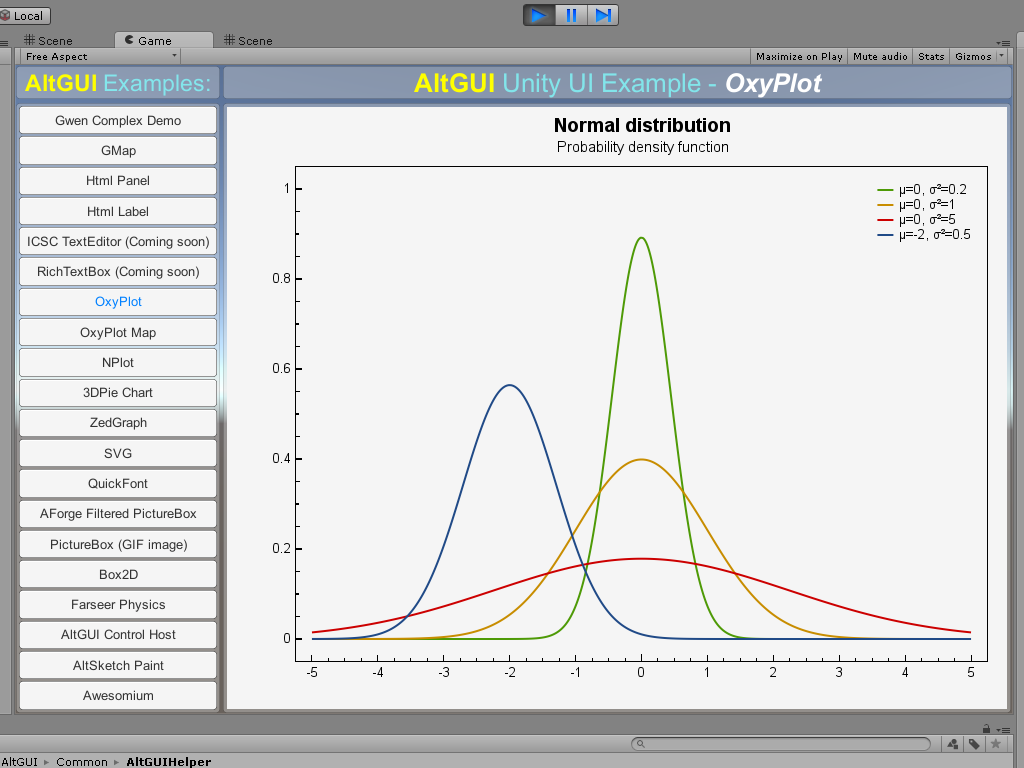 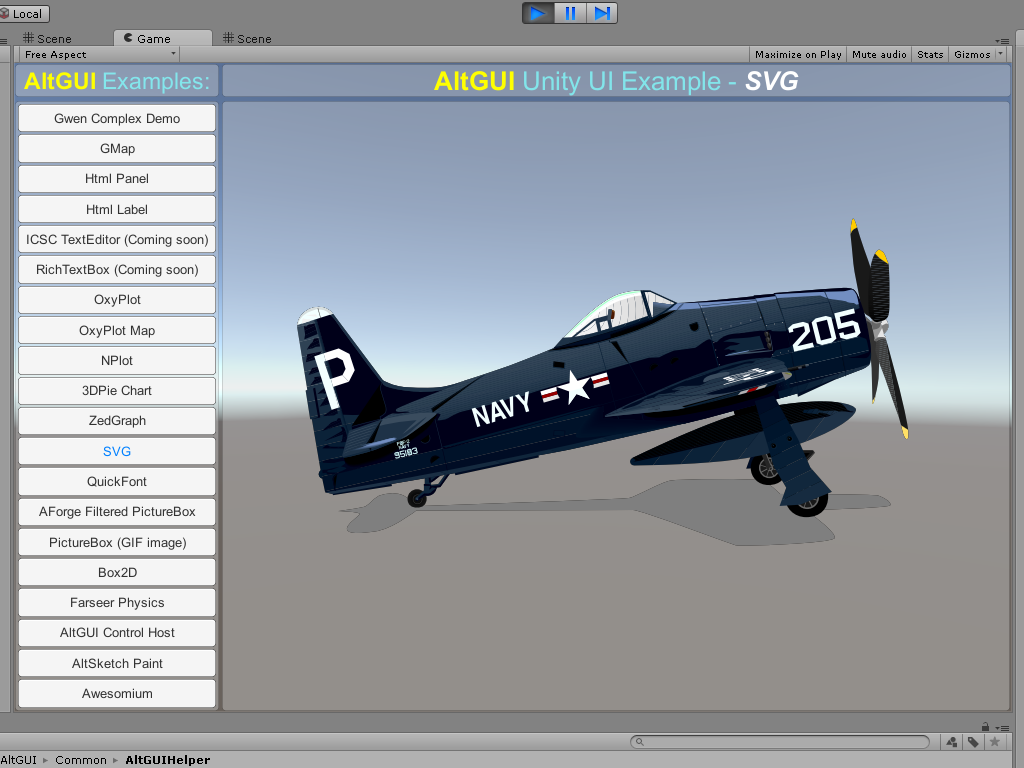 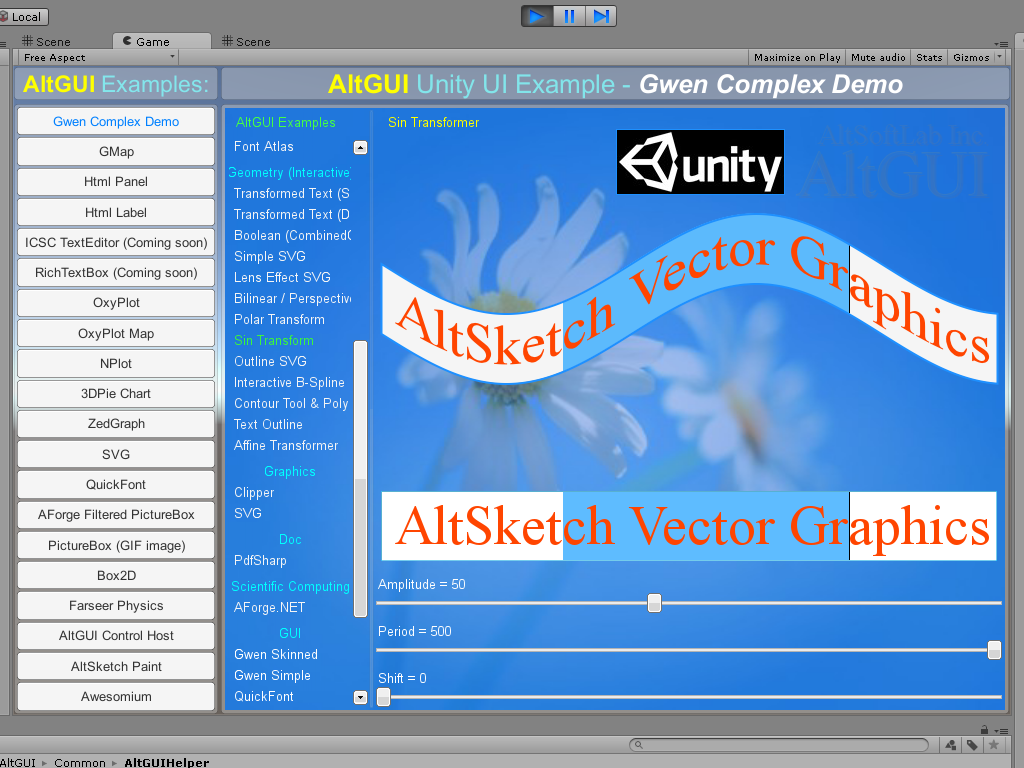 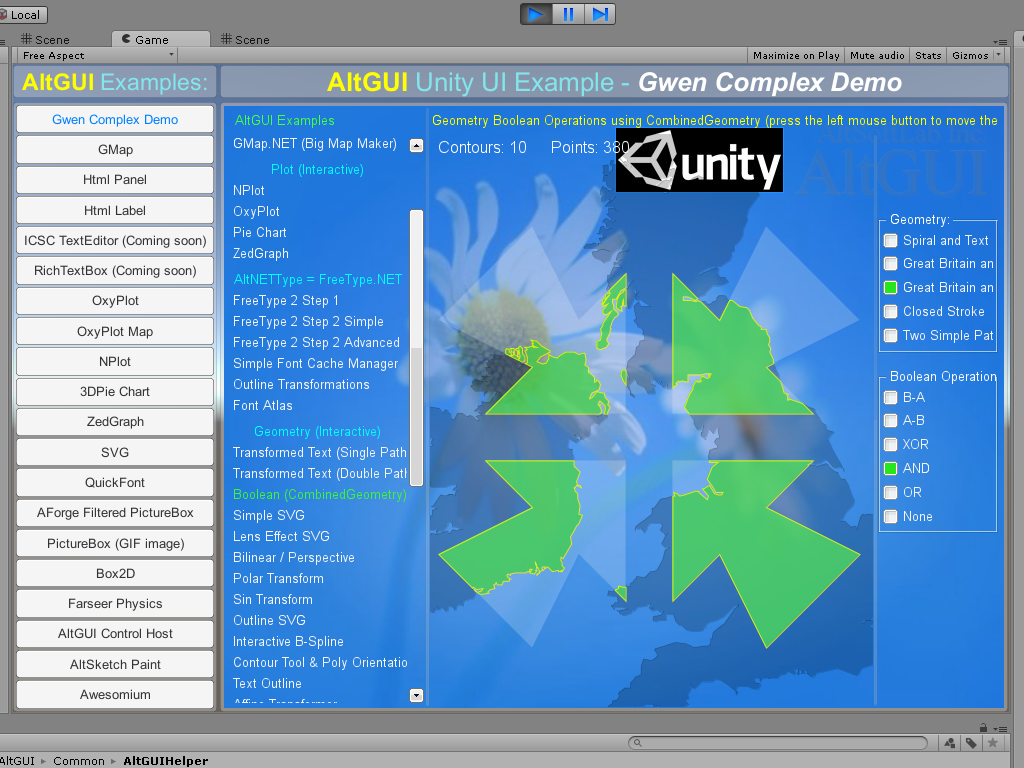