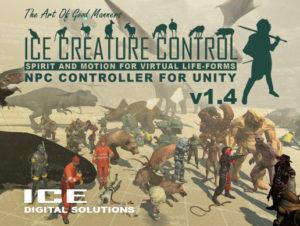 CECreatureControl is an incredible asset to breathe life into your virtual characters – within minutes and without typing one single line of code!

ICECreatureControl is an advanced AI system for Unity, which offers you a large spectrum of possibilities to integrate nearly each kind of creature quickly into your project. The ultimate ‘All-In-One’ AI for all your predators and prey animals, monsters, dragons, dinosaur, soldiers, zombies, aliens, bandits, pirates, trolls etc. but also the right solution for smart NPCs.

ICECreatureControl is Multiplayer ready and works well with Photon Unity Networking (direct supported) but also with other network assets.

ICECreatureControl offers your creatures’ boundless worlds with its own internal pathfinding and avoidance system, which is perfect for procedural worlds or voxel based terrains, but ICE works also well with Unity’s Navigation Mesh and Aron’s A* Pathfinding Project. Both systems are fully supported and can be used as desired but they are not necessarily required.

ICECreatureControl gives you and your team unlimited freedom to customize the behavior of your creatures as desired. The internal behavior system allows the definition of a variable number of customized behavior rules for each thinkable scenario, whereby each rule provides a set of optional features (e.g. to adapt various motion settings, to play audio- and animations clips or to steer the Animation Controller, to instantiate new effects and objects, control body parts, tools and weapons, to adapt vital-signs and other status values, to pick-up items or to distribute items at certain places in scene etc.) and whatever your creature shall do, you can define it within such a behavior roll.

ICECreatureControl provides you to define several targets for each creature at the same time. Creatures with multiple targets will select the right one automatically according to the given situation, by using its customizable sensoria and selection criteria to identify relevant targets, assess risks and benefits, and react with appropriate behavior. In addition to the target selection, the selection criteria also allow dynamic relationships between the creature and its targets, because the creature could also react differently to a certain target, depending on the given conditions e.g. the predator will only attack if it is hungry or if its prey is weaker or already injured.

ICECreatureControl creatures are friendly and harmless at birth, but with some training, they quickly become helpful companions who can collect items or use tools, but they can also deal with hand- and shooting weapons and mutate quickly into dangerous and aggressive combat machines.

For this, ICECreatureControl comes with an advanced weapon system and tons of additional components to increase the range of function and the abilities of your creature but of your player as well.

The most interesting components here are for sure the weapon system, which includes scripts for melee and long-range weapons, mines and other explosives, as well as a complete turret system, but also the other items and entities are worth mentioning. These collection includes scripts for flashlights, torch, machines and further tools, which your creatures (but also the player) can collect and use during the runtime. Furthermore, the additional component collection contains also several location and zone scripts and an environment system to steer the day/night cycle and to generate several environment values, such as time, temperatures, weather conditions etc., so your creatures can react to its surrounding environment and e.g. sleeping at night etc.

Finally ICECreatureControl also contains a powerful pool management system to handle the population of your creatures, spawning items and weapons and allows your creatures to find their targets quickly and resource-friendly.

ICECreatureControl works well with a large number of 3rd party assets out-of-the-box, but in some cases, it is advantageous to coordinate certain functions to achieve the best result (e.g. damage handling). Ice includes a smart integration system to handle such native integrations automatically. In this way the scripts of your ICE creatures as well as all other included ICE components can be merged clean and stable with the given code structure of external asset packages, just by clicking one single button. Currently supported are already A* Pathfinding Project, Photon Unity Networking, UFPS, TPC, RFPSP, UnitZ, Easy Weapon System, UniStorm, PlayMaker, Energy Bar Toolkit and GameFlow and further assets are already in the pipeline. But please note, all these integration features are extended benefits, which I provide for free to simplify the integration for you.

ICECreatureControl as well as all additional components and integration features based on the ICE World framework, which provides you a feature-rich, stable and uniform scripting environment and therefore excellent matched and well balanced components. The whole code is strict object orientated and well-formed written in c# and fully included. In addition to that, interested customers can use GitHub to get access to beta sources and early updates. Certain parts of the ICE World can be also used for own projects to use certain features or to simplify the integration of own scripts.

ICECreatureControl provides you a customized, user-friendly interface to handle all the above-mentioned features with some mouse clicks. The User Interface includes an integrated help system, which provides a help button for each control element, so you can get all required information directly in the inspector without using external document. Also ICE provides advanced Gizmos to visualize your settings in real-time.

Further information, backgrounds and solutions can be found in the extensive manual, which is included, online on the homepage or in the Unity community forum as well.

But please note, ICECreatureControl is not a toy with three buttons, but a powerful AI system for professional applications that offers you countless options and possibilities. It is easy to use (without scripting) and can automate a lot, but ultimately it is you who determines where to go.

ICECreatureControl is made for creative people, for artists as well as for programmers, for professionals but also for hobbyists.

ICECreatureControl is made for people who want more and expect more.

ICECreatureControl is made for YOU, to realize YOUR projects!